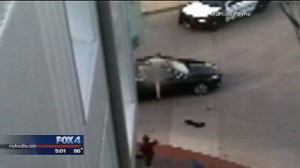 Weds– There’s a news story from last week in Oak Cliff, Dallas, TX of a street corner attack on Zang Blvd. From his apartment, an erstwhile videographer, films a white guy stripping himself naked and rambling in a tight circle before suddenly attacking a near-by–and not fleeing–woman and her child. That attack is not shown and appeared to be brief as the camera quickly cuts to another scene of that naked fellow prowling back into view and jumping, almost diving, right into the sunroof of a passing vehicle. He summarily attacks the female driver of that vehicle and she is heard screaming to high heaven–or to the previously mentioned apartment with video camera–and eventually crashes into a utility pole.

There are a host of things that we simply no longer do as a community of people learning to co-exist along this journey. Somehow, with the advent, acceptance, support and/or tolerance for surreal participation, we no longer believe that what we are witnessing is worthy of swift and decisive action. Instead, we have a collective social media mindset to document foolishness and display it, as if to channel Marlin Perkins from the 70’s television show, Mutual of Omaha’s Wild Kingdom.  On that show (in memory) Zoologist, Perkins often was seen cuddling a cute and harmless fawn before throwing it to his sidekick, Jim Fowler, who was wrestling alligators, Tasmanian Devils and large iguanas on the island of OhHellNo, or some such craziness. “Good Luck with that anaconda necklace, Jim…Now, a word from our sponsors“. 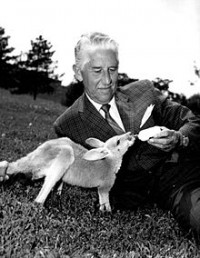 You were probably expecting a more recent reference, something like the Jackass movies, YouTube or even, America’s Funniest Home Videos, but the advantage of being older is that your reference library is more vast. I believed old folks who used to sit on their porch,  swinging and watch the world advancing past, only to quip, “Everything old is new, again“.

The news report alluded that the naked man’s actions are likely drug related. In fact, his last victim seems to be equally traumatized and eloquently, even instantly forgiving as the story ends, and offers, “He doesn’t even realize what he did”.

Another thing that we used to say, but seems to have fallen off the lexicon is, “If it had been a snake, it would have bit me“. It’s usually said when we find something that we’re desperately looking for, right in front of us.

Watching the video, it seems that none of the participants, “knew what they were doing”. Throughout the video there are cars driving past the scene of a man taking off his clothes in front of a woman and child, let alone in public. There are other people seen on the street talking on cell phones as the naked man rampages and they neither advise others away or protect the woman and her child. There is the woman with her child, who merely watches the man strip off his clothes, then attacks her and the child. There is the ridiculous foot pursuit and then a cruiser from the Dallas Police of an active assault in their presence. Lastly, there is the victim and her slow roll thru chaos with little regard for the unfolding and active intensity of it. Violence and chaos are not predictive or controllable…unless you have been paying attention all along…to your community…neighbors.

From his high perch, the videographer, was watching and waiting and ready to pounce on the actions of those below. I used erstwhile earlier because I am familiar with him from years ago when, as a college student, I hired him. He was studying film at that time and it seems has fallen into his realm.

Like Marlin Perkins, videographer Marcus Payne, stood off camera and let his virtual sidekicks in the scene handle the dangerous parts. Perkin’s guy was naturalist, Jim Fowler, a well-trained observer of the environs, creatures and their behaviors. We, as Payne’s “Jim”, on the other hand,  are always just a moment away from…something. Oak Cliff is a moment away from gentrification’s iron, corrosive fist. We salvage nothing in the pursuit of progressive living. At the same time we are victims of looking past our obvious and fainted, inner-city flaws. Poverty. Drug abuses. Violence. Fear. Educational depravity. Food deserts. Cheap electronic devices. YouTube. America’s Funniest/Craziest/Dangerous. And, it seems…”ain’t nobody got time for dat…snake sitting in the corner.